This past August we successfully raised another baby pigeon that we named Mambo. Jim found him fallen from a nest near the public garbage cans, by the castle tower.  That same day our mason found another baby pigeon, about the same age, behind our terrace. I mixed a batch of mashed seed and egg yoke to force feed the little guys. I've tried saving 2 other baby pigeons, since my success with Pierre, but they didn't make it. I've learned to not get attached, or to name them right away.
After two days the second bird died.  I didn't think Mambo would make it.  It was almost impossible to feed him. Every two hours I would chase him around the terrace and use a towel to catch him.  I'd then use the towel to wrap him up, just keeping his beak sticking out. With one hand I pried his tiny beak open and with a finger shoved the mash down his throat. I do have videos.   Little tenatious Mambo after two and half weeks of me running after and wresting with it to eat, finally learned to eat seed on its own. But he still couldn't fly,  so he hung out on our terrace.   At night, when all the other birds went to their lofts, he would walk into the kitchen and over to the towel in the corner to sleep.
We worried he wasn't getting enough to eat as he was still too young to be on his own and if we put seed out on the terrace, the other birds ate it and he didn't have a chance. We set a feeding spot in the kitchen and left the window open for him to come in.  He didn't like coming in and he never did get used to us.
Now he is flying and living with the flock - and we don't know any more which one he is.  Here is a photo of Mambo after we found him and in the kitchen window. 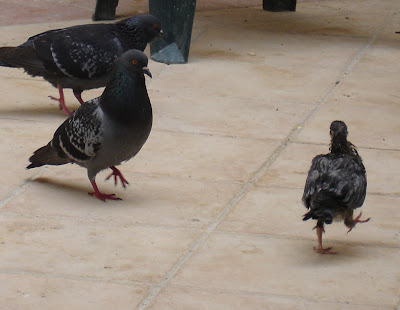 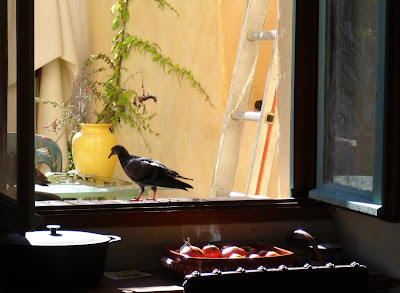