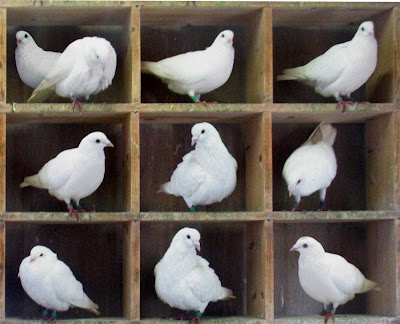 The inspiration for the name of this mathematical principle: pigeons in holes.
Here n = 10 and m = 9 so we can conclude that some hole has more than one pigeon.
Also known as Dirichlet's box (or drawer) principle, states that, given two natural numbers n and m with n> m, if n items are put into m pigeonholes, then at least one pigeonhole must contain more than one item.
Posted by Robin Johnson at Monday, December 22, 2008 No comments:

Mumbai, Dec. 6 2008 (AFP) -
Thousands of pigeons that flew the coop as Islamist militants and Indian security forces battled for almost three days at Mumbai landmarks last week have begun returning.
Pigeons that were a constant presence around the Jai Mahal and Trident/Oberoi hotels and Mumbais's main railway terminus disappeared for more than a week after the November 26 attacks that turned the city's southern peninsula into a battleground.
To the delight of bird lovers and tourists, many of whom feed the birds, the pigeons have begun to return, the Mumbai Mirror said.  The Mirror quoted Yuraj Kaginkar, the hospital manager for the Bombay Society for the Prevention of Cruelty to Animals, saying the he had found some pigeons with injuries that must have been sustained during the siege.
Traveling with his ambulance to sites taken by the militants, he found "a lot of pigeons with injuries to their head, wings, feet and some fractures," he said.
Constant blasts had forced pigeons that roosted in the hotels to keep circling, unable to eat, for three days, he said.
The times of India said 15,000 pigeons were fed daily opposite the Taj, and quoted an animal activist saying grain had been put down to attract the birds back.
Many of India's 1.1 billion people are animal lovers, believing animals, like humans, possess souls.
Friends and Pigeon Blog followers:
This article was brought to my attention by a friend. If you find any interesting pigeon stories or facts, please pass them on.
Posted by Robin Johnson at Monday, December 15, 2008 No comments:

This obituary was sent to me via my friend Cal.  Thanks Cal!
Richard Topus WWII Pigeon Trainer
In January 1942, barely a month after Pearl Harbor, the US War Department sounded a call to enlist.  It wasn't men they wanted.  The Army was looking for Pigeons.
To the thousands of American men and boys who raced homing pigeons, a popular sport in the early 20th century and afterward, the government's message was clear:  Uncle Sam Wants your Birds.
Richard Topus was one of those Boys.  He had no birds of his own to give, but he had another unassailable asset:  He was from Brooklyn, where pigeon racing had long held the status of a secular religon.  His already vast experience with pigeons- long ardent hours spent tending and racing them after school and on weekends qualified him, when he was still a teenager, to train American Spies and other military personnel in the swift, silent use of the birds in wartime.
World War II saw the last wide-scale use of pigeons as agents of combat intelligence.
Topus, just 18 when he enlisted in the Army, was among the last of the several thousand pieoneers, as military handlers of the birds were known, who served the United States in the war.
A lifelong pigeon enthusiast who became a sucessful executive in the food industry, Topus died Dec. 5 in Scottsdale, Arizona, at the age of 84.
Pigeons have been used as wartime messengers at least since antiquity.  Before the advent of radio communications, the birds were routinely used as airborn couriers, carrying messages in tiny capsules strapped to their legs. A homing pigeon can find its way back to its loft from nearly a thousand miles away.  Over short distances, they can fly a mile a minute.
(Actually the longest recorded flight took 55 days to fly from South Africa to England)
In World War I, pigeons proved their continued usefulness in times of enforced radio silence. After the United States entered WWII, the Army put out the call for birds to racing clubs nationwide.  In all, more than 50,000 pigeons served the United States in the war.
Topus enlisted in early 1942 and was assigned to the Army Signal Corps, which included the Pigeon service.
Though the Army phased out pigeons in the late 1950s, Topus raced them avidley till nearly the end of his life.  He left a covert, enduring legacy of his hobby at Friendship Food Products, for which he oversaw the design of the highly recognizable company logo, a graceful bird in flight, in the early 1960s.
- New York Times
Posted by Robin Johnson at Monday, December 15, 2008 No comments: