Jim and I continue to have our flock of pigeons, with Henry and Snap Dude eating out of our hands. Snap Dude, left, has been with us for about six years. Henry, right, is the offspring of Pierre, the baby bird I first rescued and raised in 2004. 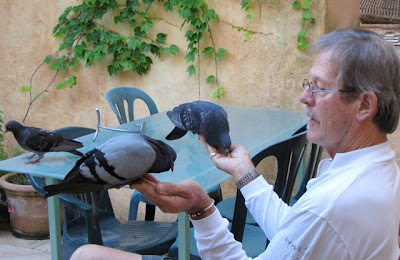 Each subsequent summer has brought new pigeons into our life,as they quite literally 'fall from the sky' onto our doorstep. 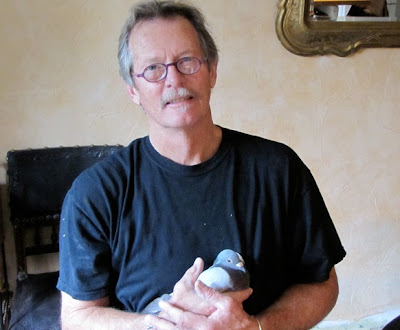 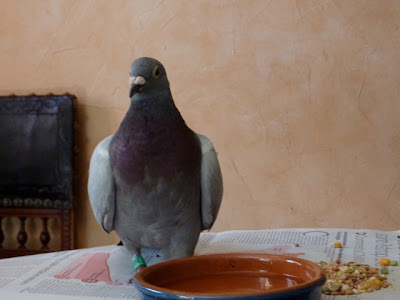 That’s how a pigeon that we named, Racer Five, arrived mid july. Jim saw him on the road in front of our house unable to fly, with a cat nearby perched and ready to pounce. He didn't resist when Jim picked him up, as he was used to being handled by people; he was someones racing pigeon. Turned out Racer Five was on route from Orlean to Pau, 900 kilometers, and was two-thirds his way home. We found this out after we called the number off the green band on his leg and talked to the owner. He told us the bird was probably just tried and over heated, and asked if could we keep it till it was able to fly; could be a week or two. So I set up a corner in the kitchen with newspapers a water bowl and food. The pigeon seemed to know to stay on the paper, except when we left the door to the front room open and he would go hide somewhere and we would have to then find and chase him around to get him back in the kitchen. He didn't seem so interested in the food we gave him, and only ate when he was out on the terrace with the other birds. Because he couldn't fly we always had to bring him inside when we weren't around, due to the cats that frequent our terrace knowing there are pigeons to eat. After a couple weeks Racer Five was spunky and healthy but still not flying. We finally realized he had a broken wing after we tried dropping him from a few feet to see what happened. Well, how else could we know? We then we knew we had a problem: the owner would have no use for a racing pigeon that didn't fly and we couldn't keep the bird. We called a friend who keeps pigeons and asked her if she would take him, she came by one afternoon and we boxed him up and sent him off to his new home. 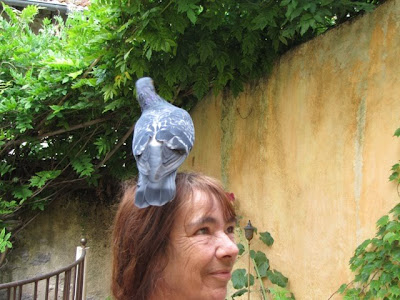 The same day we got Racer Five settled in his new home we got a call from Mary Claude, a friend who's home is a designated official bird rescue sight. She had raised a baby pigeon by hand and now it was ready to join a flock, but there weren't any other pigeons where she lives. Mary Claude has a way with birds, she even kind-of looks like a bird. She has raised several birds that have returned to nature. But she bonds with her birds in a way that, after they go back to nature they are known to stop by her house during migration just to say hi. I must admit I was a bit jealous when she told me her pigeon rode around on her shoulder; I've never gotten our birds to do anything but eat out of our hand. Even Pierre, who I raised by hand, and I wanted to believe loved me like a mother, was really just interested in getting a free hand out. But she told us, what began as fun - the bird following her around or riding on her shoulder, soon became a problem as the bird would not let her alone, it shit all over their house and showed no signs of returning to nature.

Mary Claude asked if she could to bring Tai Tai over to our house and introduce it to our flock of pigeons, since it had not encountered other pigeons, it apparently didn't know it was a pigeon. When she first let Tai Tai out of the cage on our terrace, the bird sat on Mary Claudes head, then shoulder and was biting her finger - another irritating activity it had developed. Then it flew off to a roof behind our house and sat with the other pigeons, flew back and landed on my head this time, before flying off again not to be seen the rest of the after noon. We assumed success. NOT

Jim noticed the mentally retarded man, who lives behind our house, sitting on a stoop with Tai Tai on his shoulder laughing that the bird was biting his hand. The next day the same woman who took Racer Five showed up at my door with Tai Tai in her arms. She had been at Le President Cafe on the corner and Tai Tai was there walking on tables, landing on peoples heads and biting peoples fingers. Some kids had captured the bird and were tormenting it, so she rescued it and brought it to our house. I said, "I know that bird.", then explained the history: that Tai Tai didn't know it was a pigeon and wanted to hang out with humans, which was all it had know until the day before. Tai Tai was frightened and shaking from her experience. OUr freind then offered to take Tai Tai with her to keep, as she had done with Racer Five. So we boxed her up in a real wicker pigeon carrier I found in the basement of our house.

Yesterday I saw the woman with who took the birds and she reported that both pigeons are doing fine; Racer Five seems happy runnings around on the floor of the cage retired from his racing career and Tai Tai is slowly getting the hang of being a pigeon, although she will have to remain in a cage as she will probably always land on heads and have the habit of biting people. 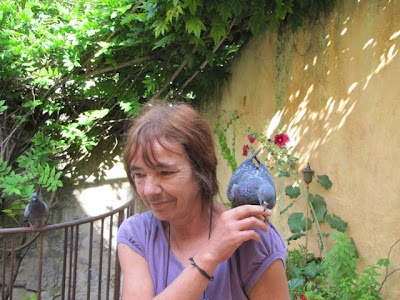 Posted by Robin Johnson at Monday, December 13, 2010 No comments: