One of the most interesting aspects of the history of pigeons is their service in the military. During WWI the homing pigeons played a major role in communications - often they were the only means of communication available. The US and French military maintained and used homing pigeons up to and including the Vietnam War.
During both world wars Pigeons were brave soldiers holding the rank of captain.   They were often released from behind enemy lines from Airplanes and from ships far out to sea.  Many a downed airmen owes their life to a pigeon he let go as he sat in a tiny rubber raft in the ocean.
They were even used to rescue men lost at sea.  In WWII, US forces took advantage of the pigeon's excellent eyesight (up to 10 miles, even in fog) and rare ability to see and recognize different colors.  Specially trained pigeons rode in the bellies of rescue planes, pecking a button upon spotting the orange survival vest of a downed pilot.
Pigeon soldiers were decorated and buried with military honour.  The Dicken Medal was instituted in 1943 to honour the work of animals in war recognized for their outstanding acts of bravery and devotion to duty.   Recognized worldwide as the animals' Victoria Cross, the medal was awarded 54 times between 1943 and 1949, to 32 pigeons, 18 dogs, three houses and a cat, to acknowledge actions during WWII.
Here are just a few short histories of some famous war pigeons.  These are amazing stories of pigeons fighting to return home no matter what the cost.  Many pigeon were mortally wounded carrying life-saving messages across Asian jungles, vast deserts and the frozen arctic.  These are stories of pigeons that were shot at, caught in crossfire or hunted down by Hitler's Platoon of Falcons. They lost eyes, feet, and other body parts, but continuing their missions nonetheless.
KENLEY LASS was dropped into France with an agent codenamed Phillippe who was parachuted behind enemy lines.  In October 1040 Kenley Lass flew back to her loft, the first successful receipt of secret communications from an agent working in occupied Europe.  She received her Dicken Medal in March 1945.

MARY OF EXETER, the pigeon that just wouldn't give up.
Also a recipient of the Dickens Medal, she served for five years during the Second World War until 1945, dropped prepeatedly into France and then returning to England.  Mary was enlisted in the EXETER GROUP on the National Pigeon Service lines of defensive communication.
Four times she was injured, but each time she recovered to deliver her messages.  The first time she was shot.  The second time, when she didn't return, they assumed she had been killed. Four days later she dropped down on her loft covered with blood.  She was ripped open from neck to her breast, she had been attacked by a falcon.    Injured the third time she once more recovered only to be hit by shrapnel during a bombing raid.  The shrapnel damaged her head and neck, but her resourceful owner, Charlie Brewer used skills from his trade as a cobbler to make her a leather collar and she lived for another ten years.  She was buried with her collar. She had a total of 22 stitches in her one pound body, the equivalent of 4,000 stitches in the body of a 200 pound man.
THE MOCKER, was born in 1917. He was wounded on his 52nd mission. He lost his left eye and part of his cranim.  He was awarded the "Distinguished Service Cross," as well as the French "Croix De Guere.  The Mocker died on June 15 1937.  He was the last WWI pigeon hero to die.
WHITE VISION
The weather was bad and the search was called off.  But White Vision was released from the boat and arrived at her home loft at about 5 pm, having flown over 60 miles of heavy seas against a head wind of 25 mph, in poor visibility, to deliver the coordinates of a stranded Catalina Flying Boat.  All 11 crew members were rescued.
PADDY
An Irish pigeon awarded the Dicken Medal after being the first pigeon to arrive back in England with news of the success of the D-Day invasion, out of hundreds dispatched.  He flew 230 miles across the English Channel in four hours and five minutes,  the fastest recorded crossing of the English Channel. 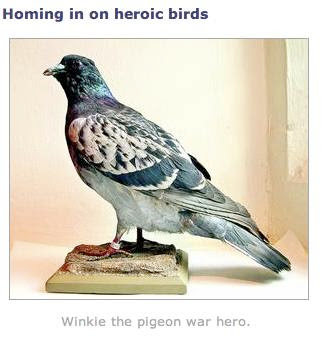 WINKIE, the first ever Dicken Medal recipient.
On Feb 28th 1942 a British Beaufort bomber was forced down in the North Sea.  Winkie thrown free of her onboard container, wings clogged by oily water flew to the Scottish coast 129 miles away.  Meanwhile the bomber crew huddled in a dinghy shivering from the cold. Shortly before dawn, Winkie arrived in Scotland and a code tied to her leg helped lead the rescue team to the downed plane. The crew later gave a dinner in London to Winkie and her owner in appreciation of her life saving fly.
BLACKIE HALLIGAN
During WWII the delivery of a message that needed to be relayed back to headquarters was entrusted to a member of a special brigade, a homing pigeon named Black Halligan.  The journey to headquarters should have taken just 20 minutes, but Blackie was shot down in the Japanese fire.  Five hours later the maimed and bloody bird managed to complete its trip bearing the important message.
MARY
She flew during 5 years for the Allied Powers, was wounded 22 times, and killed in action. When her body was found, it was covered with wounds. Mary was decorated with the Dickens Medal, and buried with full military honors.
KAISER
Lastly, the most famous pigeon prisoner of war, Kaiser, a German bird captured during WWI was born in 1917 and captured in 1918 by American forcs in the battle of the Meuse. He was used in the Signal Corp breeding program and sired over 100 children, during his long life. Kaiser died in 1949, at 33, making him not only the oldest recorded Pigeon on record, but also the only pigeon to have served in both world wars.
Other famous pigeons decorated and buried with military honour:
Lord Adelaide
President Wilson
Julius Ceasar
Lady Astor
Jungle Joe
Berma Queen
The most well-known military pigeon from WWI was Cher Ami, and from WWII, G.I. Joe.
Both these highly decorated pigeons have stories that deserve their own blog. 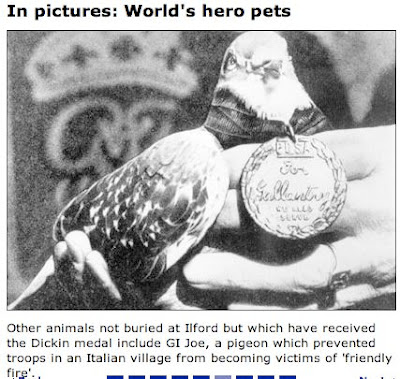 I have been deeply engrossed in my research on the influence of the Papal Pigeon Knights of the Holy Jerusalem Bird Seed on Pope Innocent’s decision to knock the B-Jesus out of the Languedoc Cathars.

I can see from your Blog of Pigeon war heroes that some of these guys still have some noble ‘occi’ influence still in their genes. So I’m looking forward to meeting some of them. I’ll be wanting to find out if any knowledge of the Massacre at Montségur has been passed down to them by their lay-about ancestors who were known to have perched idly by and did nothing, absolutely nothing, to help those fun-loving Cathars escape the papal barbeques of 1244.

Yes, French medieval history records that the occi-pigeons still have a lot to answer for. I can see from a number of your photos that many of them still carry the stain of their ancestor’s shameful deeds. Fancy being in ‘cahoots ‘ with the Papal Pigeons – disgraceful!

I have a vendetta to accomplish! Occi-Pigeon Barbeque coming up in 2010. It was foretold in 1245 that the retribution was coming and it would be in 2010 from an occa from down-under. They can run but they can’t hide.

Ur a fkng idiot. U have an even smaller brain than a pigeon

Guys, ignore the mocker who doesn't even have the balls to put his name on the post.

It's a long time since this article was written but years later it continues to interest, amaze and inspire!
What these little birds managed to accomplish was wonderful. God bless them all and their everyday cousins.
Rita Campbell.

Very nice to read. The pigeon is a great bird and what they done in the war for us is outstanding.

Thank u so much for having such a nice and entertaing stuff for us. I really enjoy your blog and the way you have describe your content.I also have some amazing and wonderful stuff and i wana to share it with you.
Stories Tellers

Hey some one change it from houses to mice please

Amazing stories of yet another misunderstood creature that the earth has been blessed with. As for the "mocker," it is unfortunate the animals can't call an exterminator to spray him/her with a lethal dose of compassion. Let's see how loyal you would be with body parts missing. It is sad to think one of your ancestors were killed in a hole because of a pigeon. Maybe one of your ancestors were saved by a pigeon's bravery.

Thank you for sharing us education, please kindly visit mine :D

Nice Blog. This information is informative. if you are looking for Persian rug cleaning. Visit us at Gem Rug Cleaning Perth